"As mothers and fathers, grandparents, siblings, cousins, aunts, uncles and allies, we believe in and implement a model of organizing that is people- and community-centered, and is explicitly anti-racist."

We Are Building a Movement to Stop the School to Prison Pipeline.

Families and Friends of Louisiana's Incarcerated Children
Youth Justice Action Month #YJAM is still going strong! Check out our newsletter for all the updates on events this week, including a social media toolkit for tomorrow's JJRAIC meeting! https://fflic.ourpowerbase.net/civicrm/mailing/view?reset=1&id=862&cid=8881&cs=56444e91386d622b6a9ee9c44de6820b_1634567473_168

We are hoping you will join FFLIC for our 20th Anniversary Mock Jazz Funeral memorializing the lost dreams of our children. This year we are adding a Trunk or Treat to be held on Saturday, October 30, at 12 noon in Monroe, LA. We will be convening near the LSU Medical Center on Jackson around 11:30...
View on Facebook

Families and Friends of Louisiana's Incarcerated Children
On Tuesday, October 5th, FFLIC, along with a parent of a teen held in custody, and the Loyola Law Clinic filed suit against the City of New Orleans for illegal evacuation of youth to an adult prison. Since then, new parents have joined the suit and the first hearing has been scheduled for this Monday, October 18th at 10:00 a.m.! FFLIC will keep you updated on those court proceedings.

“Our elected Governor, John Bel Edwards, should be ashamed of his assertion that a punitive, violent and inherently traumatic prison like Swanson is a safe place for young people.

Swanson and other youth prisons like it have been havens for physical, mental and sexual abuse against children. It's been repeatedly proven that the state is unfit to provide the safety for the youth in their custody.

Additionally, Governor Edwards’ blatant criminalization and adultification of system-impacted youth, who are disportionately Black, is demonstrative of the state and the country’s cruel history of enslavement, oppression and control of Black lives and labor.

Young people of all backgrounds engage in risky behavior at the same rates, yet Black youth are six times more likely than white youth to be incarcerated in Louisiana. This is unacceptable and unjustifiable.

True public safety and justice does not require the incarceration and separation of Louisiana’s most vulnerable youth from their families. Studies have specifically shown that community based programs for young people are more effective for improved public safety. Lacking adequate preventive services at the front end of the system, children only end up accessing diversion programs and mental health support during incarceration at the deep end of the system. This backwards approach negates everything we know about adolescent brain development and youth best practices.

We must change our punitive approach and invest in young people and their communities in order to properly address the root causes of crime- poverty and lack of opportunities and supportive systems. A new facility won’t prevent additional violence and harm from occurring- the new youth prison in Acadiana has already experienced several incidents since its opening. Instead, by centering the communities who are directly impacted by the youth prison system, we will be able to give kids the freedom and chance to grow from their mistakes instead of being defined by them.

The Juvenile Justice Reform Act Implementation Commission (JJRAIC) has begun meeting to finally implement reforms that were promised to youth and families over 18 years ago. These reforms could have prevented today’s youth from ever becoming involved in the criminal-legal system in the first place. The Governor must acknowledge the history of Louisiana’s broken promise to youth and also understand that Louisianans are ready for these critical changes- 73% of Louisianans, across political parties, favor community-based programs over youth incarceration.

Governor Edwards, we are calling on you to immediately halt construction on Swanson-Monroe and shut this nightmarish prison down. We are calling you in to join us at the JJRAIC meeting this Tuesday the 19th, and hear the concerns of the Commission and other child serving decision making tables that serve at your behest such as the Children's Cabinet Advisory Board and local Children Youth and Planning Boards. With these partners, we seek to invest in Louisiana’s youngest generation and to commit to implementing long-overdue community-based solutions, instead of perpetuating a legacy of systemic racism and mass incarceration.”

Families and Friends of Louisiana's Incarcerated Children
The science shows that kids literally and biologically can not think and reason like adults. #LetKidsBeKids

Families and Friends of Louisiana's Incarcerated Children
Take Action! We continue to be frustrated and angry about the lack of accountability of our state's policymakers and leaders. At the JJRAIC meetings, we will continue to ask questions and create systems of accountability to protect our children! Join us on October 19th, at 1:00 PM CST via livestream. Visit https://bit.ly/jjraic1019 for info on what you can do to end youth incarceration.

Youth Justice Action Month #YJAM is still going strong! Check out our newsletter for all the updates on events this week, including a social media toolkit for tomorrow's JJRAIC meeting! https://t.co/A8HWfZkUJe
View on Twitter
0
0
FFLIC @fflicla

2 weeks ago FFLIC, a parent of a teen held in custody, and the Loyola Law Clinic filed suit against N.O. for illegal evacuation of youth to an adult prison. The first hearing has been scheduled for this Mon, Oct 18 at 10:00 a.m.! FFLIC will keep you updated on court proceedings.
View on Twitter
0
0
FFLIC @fflicla

The science shows that kids literally and biologically can not think and reason like adults. #LetKidsBeKids #YJAM https://t.co/4tA0QOECQ9
View on Twitter 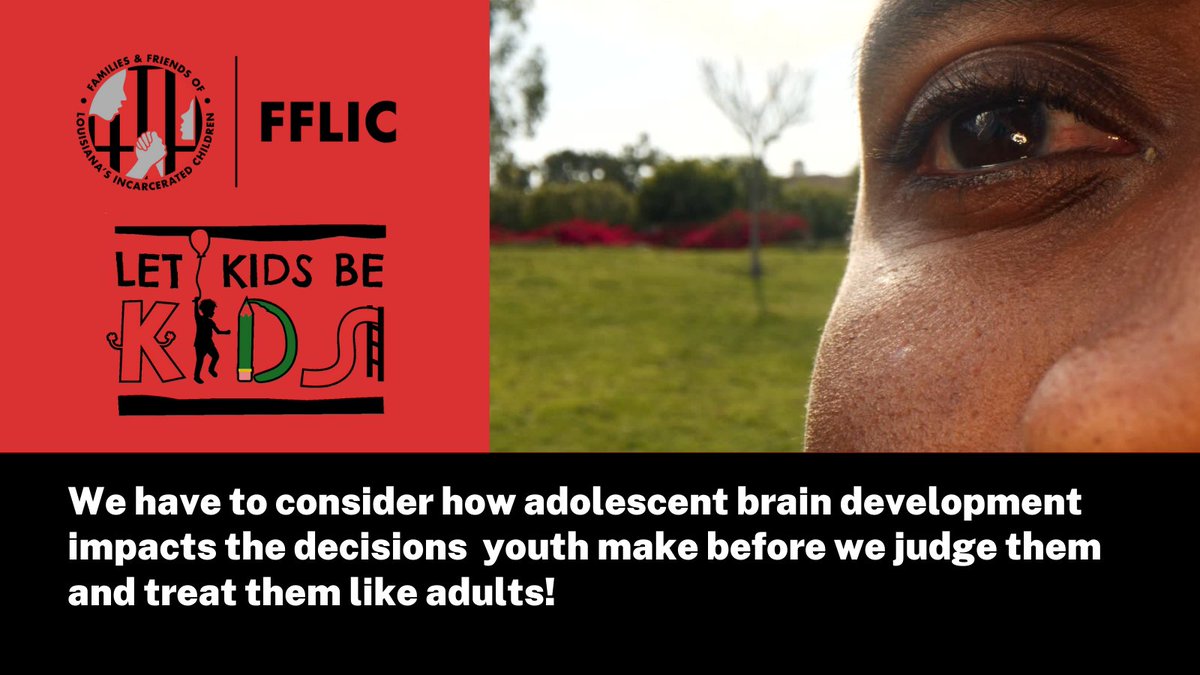 Just another reason why we need reform. #YJAM. https://t.co/UWpn2QeA6U
View on Twitter 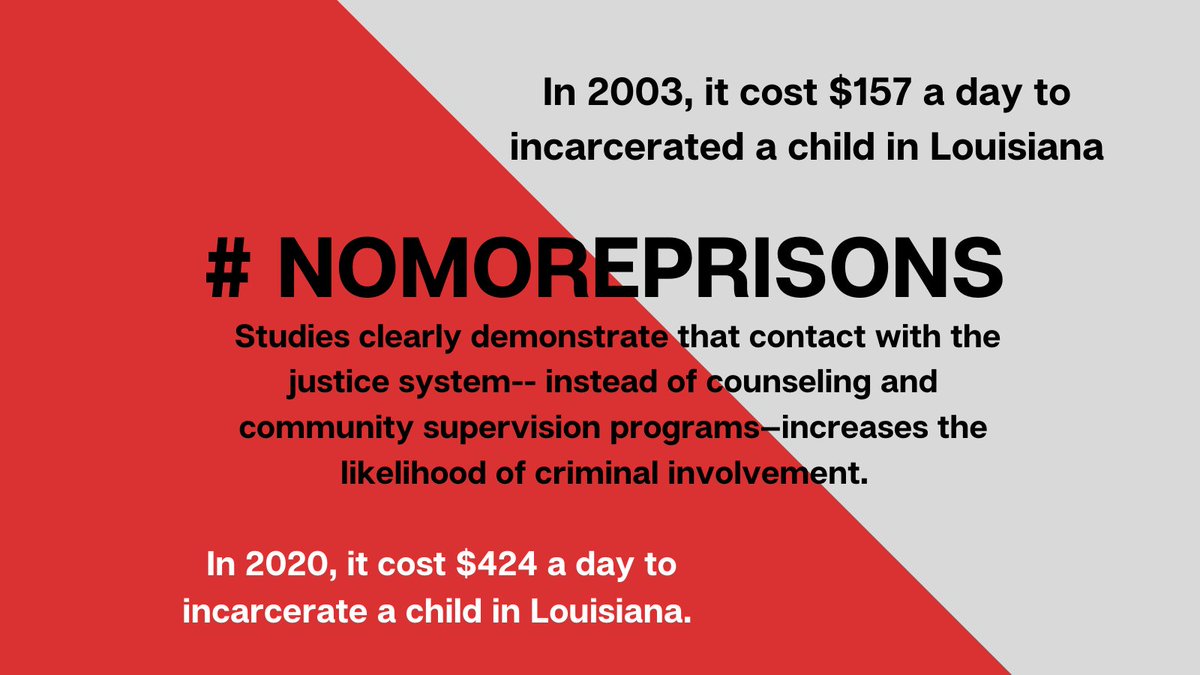 Take Action! We continue to be frustrated and angry about the lack of accountability of our state's policymakers and leaders. Join us on Oct 19th, at 1:00 PM CST for the JJRAIC meeting. Learn more about what you can do to end youth incarceration. https://t.co/D3d34uiDhR
View on Twitter
0
0

WE ARE ASKING OUR SUPPORTERS TO INVEST IN FFLIC'S CONTINUED WORK TO:

Stop the school to prison pipeline to help children stay in school and reduce the possibility of incarceration, and provide training to parents and schools on positive behavioral intervention supports.