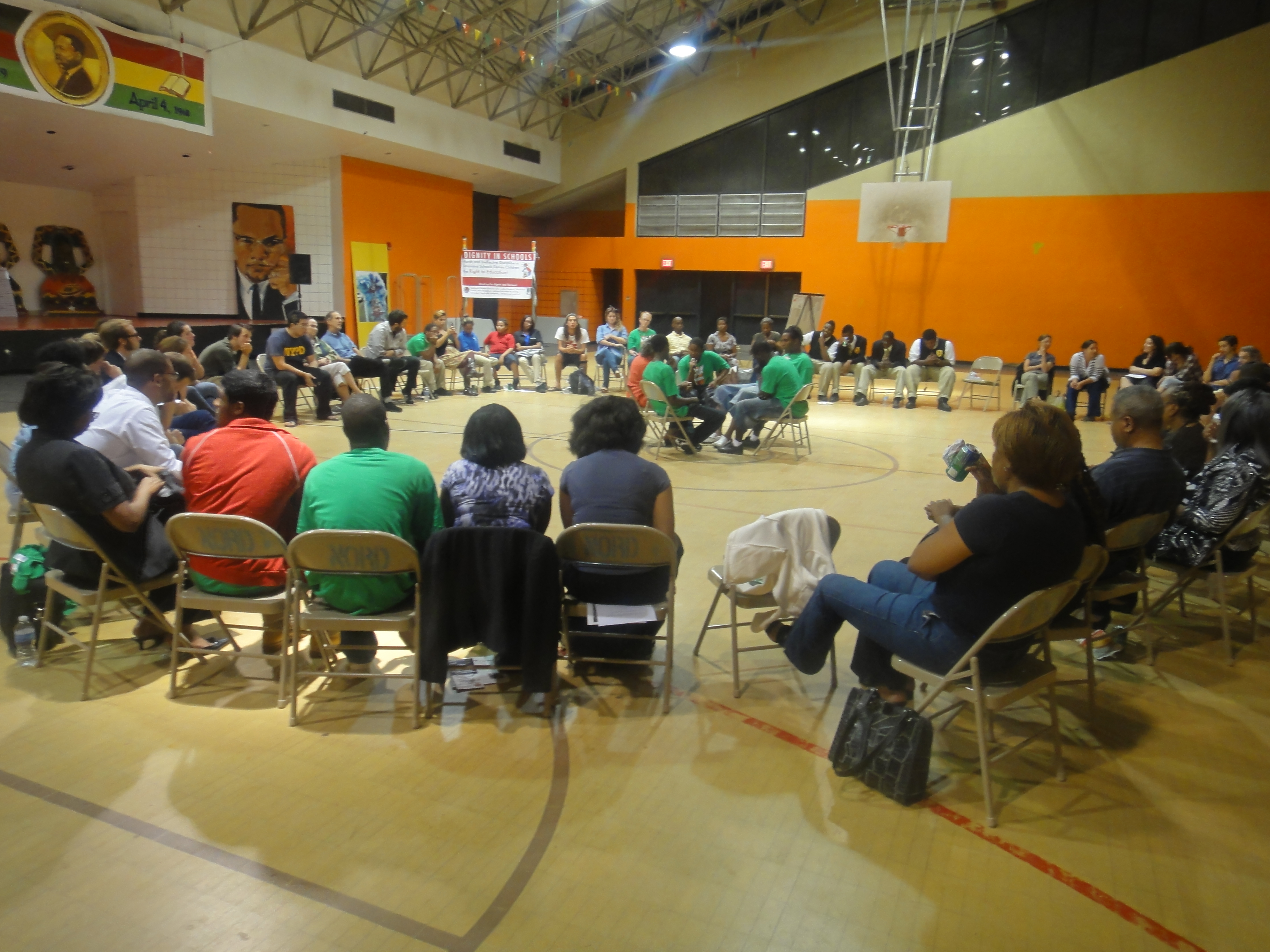 On the evening of October 4, 2011 Families and Friends of Louisiana’s Incarcerated Children (FFLIC), Juvenile Justice of Louisiana (JJPL), Kids Rethink New Orleans Schools, Safe Schools Health Student Initiative, and Young Adults Striving for Success (YASS) hosted a call to action meeting to urge the citizens of New Orleans and Louisiana to come together to end school pushouts.  This was an evening of deep listening and the development of solutions for reducing suspensions and expulsions in New Orleans and across the state.  There were approximately 60 community members who joined us that evening – young students, older students, local school district representatives, parents, teachers, community members, and a member of the Louisiana Board of Elementary Secondary Education.  As people arrived, they signed- in and began to mingle while enjoying the refreshments.  We met in the gymnasium at the Treme Center the chairs were set up in a large circle of about 70 chairs; inside the circle was a smaller circle with 5 chairs; at the four corners of the space there were 4 breakout spaces set up, leaving the center of the larger circle for the 5th breakout space.

We opened the circle with words from a John Mac High School Student (Eric), followed by an icebreaker which was facilitated by members from YASS.  Following the icebreaker, it was time for some deep listening. Several young male students filled the inner-circle chairs and were guided through a sensitive process by a well know facilitator.  Each young student told their story of how they were suspended, expelled, and/or arrested while in school.   One young man told of his experience where he was arrested and had a difficult time trying to reenroll in school. Another told a story where he was constantly suspended from school for “minor things” and felt as though “they” just wanted to get him. Another student also talked about being suspended and expelled for minor behavior issues. The threading theme between each of the students’ stories (that ranged from elementary to high school) was that they felt like they were being punished for regular childhood behaviors or mistakes.  One of our young FFLIC members, who also told his story that evening, was quoted in an online article stating, “It’s just like how the police profile people.” He said, “They select the students that they see performing as their favorite. I see that as a problem because everyone should have the same disciplinary action.  I see the suspensions as a problem because if the point is to get an education and you are taking students away from their education, how are they learning?”

After listening to the student’s heartfelt stories, the circle broke into small-working groups to respond to the stories heard in the large circle as well as to develop solutions for the push out problem.  Each small group was co-facilitated by a young person.  Upon the completion of the small group work, we reorganized ourselves into one large circle to report out on what had been documented during the small group work.  Each group had 6 sheets of large flip chart paper with solutions to suspensions, expulsions, and school arrest, all of which were developed in community by community people.  We closed the evening and ourCommunity Circleof Hope with one word from each participant.  Hope Forward. Inspired. Encourage. Educated and there were many more…

FFLIC promised that we will do our best to incorporate the solutions that were developed during the evening in to our work and to continue to keep folks updated though emails and engaged through future meetings and actions.

This event was necessary because each year inLouisianaover 300,000 student are suspended (many for minor infractions), which leads to spending invaluable time away from instructional time.