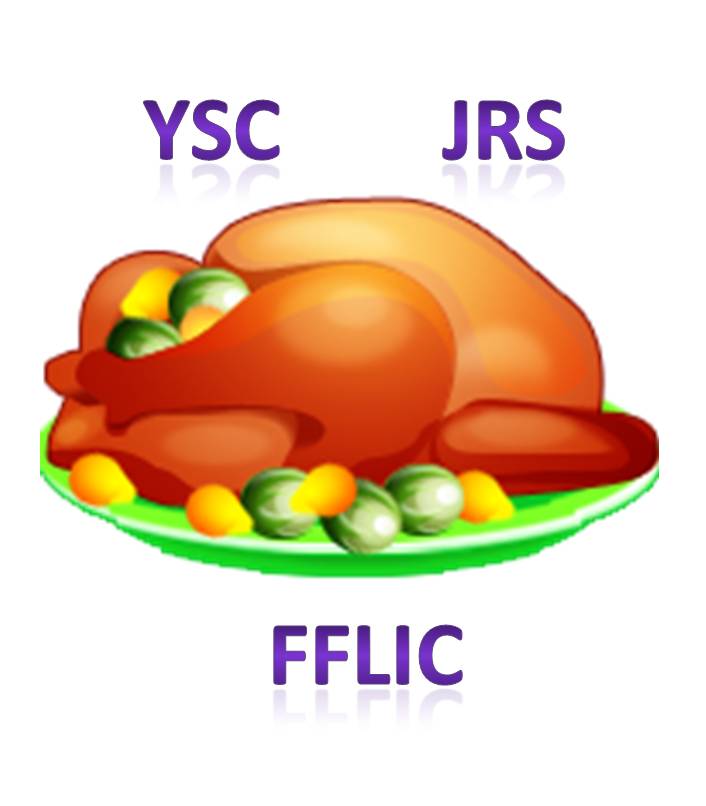 On Tuesday November 22nd, FFLIC was invited to the Youth Study Center (YSC) to have a special dinner with the youth and staff. This event was sponsored by Juvenile Regional Services (JRS) who coordinated the event with the staff at the Youth Study Center. Julia Farinas from JRS provided beautiful decorations that gave the evening a festive feel. The YSC staff made delicious gumbo and pie. Ms. Charmaine from C&C Catering provided ham, turkey, potato salad, green beans, dressing, red beans, macaroni, bread pudding, and pralines.

The evening started out with each member of the staff and the visitors receiving half of a card. The youth were given the other half of the card. We all met in the gym and those with the same halves of a card partnered together. The partners became a bowling team. Any team that bowled a strike was given a prize. The game was a good ice-breaker.  After that, the staff gave a speech welcoming FFLIC and JRS and one of the youth said a prayer. Then, everyone ate. The food was delicious and plentiful. Ms. Charmaine’s dressing was a huge hit and went quickly. We promised to bring more at the next event. The best part of the meal was talking to the kids. They were very excited about the event, especially the food.

After the meal, the staff at YSC gave out bouquets to JRS and FFLIC. Mr. Johnson blushed as he accepted a bouquet on FFLIC’s behalf. Julia Farinas was given a special award from YSC for all the work and the dedication she has shown. That was followed by a tour of the new sections of the facility. We were shown the new kitchen, new working space, and a recreation room with items donated by the YSC staff. Our tour ended with seeing the new outdoor recreation area. This was an excellent addition to the YSC because it meant that the children no longer had to spend their entire time at the YSC indoors. After the tour, we watched the youth play their basketball tournament. The kids were divided into two teams with separate uniforms and coaches. Members from JRS were invited to be honorary coaches of the teams. Everyone had a blast watching the game. Though we cheered for all the kids, everyone seemed to cheer harder for the kids that they sat next to during the dinner.

We would like to thank Glenn Holt and all the staff at YSC for allowing FFLIC and JRS to spend time with the youth. We would also like to commend the Youth Study Center for all the progress it has shown. Special thanks to JRS for making this possible, Ms. Charmaine for cooking, and to everyone whose donations made the event possible.