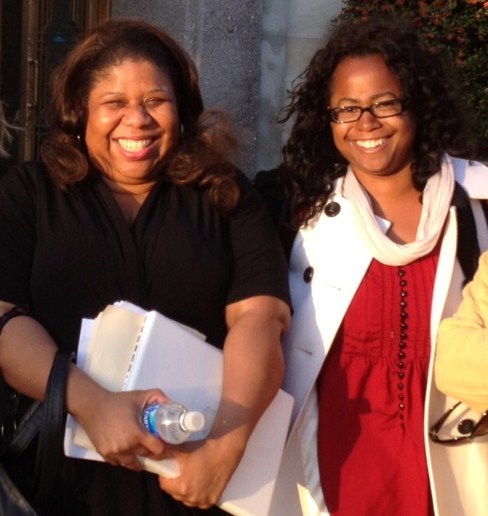 On Thursday, March 1, 2012, Ashana Bigard, community members, and I attended a Congressional Briefing hosted by the Honorable Senator Mary Landrieu in Washington D.C. The purpose of the Congressional Briefing was intended to launch the new publication, New Orleans-Style Education Reform: A Guide for Cities, a resource which outlines lessons the nation’s first charter school district learned. The Guide offers insights into how other cities can replicate New Orleans’ success in reforming their public education systems.

With concern for other cities that may believe the New Orleans reform model should be adopted, I mobilized parents and members of the community within a day’s notice to go to Washington, D.C. to speak the “truth” about education reform in New Orleans, as well as share our own children’s experiences. We arrived in D.C. several hours before the briefing began and visited Congressman Cedric Richmond’s office to express our concerns about the education reform in New Orleans. While the congressman was not in Washington, we were able to meet with his Chief of Staff, Virgil Miller, regarding our concerns and enlist the support of Congressman Richmond’s office. We told Mr. Miller that parents in New Orleans did not have real “choice” in selecting schools for their children, and we informed him that community school leaders were being muted in the education reform process. We further expressed the need to have our voices heard in the reform process and requested that the Congressman host a congressional briefing and/or hearing in order to hear the truth about what is happening in New Orleans and other parishes in Louisiana.

The briefing was moderated by Nayda Chnoy Dbby, with panelist including Senator Mary Landrieu, Jim Shelton (Asst. Deputy Secretary for Innovation and Improvement, U.S. Dept. of Education), Neerav Kingsland (Chief Strategy Officer, New Schools for New Orleans (NSNO), and Jon Schnur (Chairman of the Board/Co-founder and former CEO, New Leaders for New Schools); all of whom advocate for charter schools. In the audience were legislative aids, representatives from the Federation of Teachers, a representative from the charter school movement in Tennessee, representatives from the Gates Foundation, the Walton Foundation, KIPP, Teach for America, and us, the unexpected attendees, parents of students enrolled in Charter Schools in New Orleans. Had we not attended this briefing, the one thing this briefing would have lacked was the “truth” coming from parents like Ashana and myself expressing the short sighted opinions of the panelist. Each panelist spoke for approximately ten minutes about the phenomenal strides education reform in New Orleans has made, benefitting all New Orleanian students, families, and community members.

Senator Landrieu began the briefing by welcoming the audience. She then went on to thank her Co-Chair of the Public Charter Caucus in the U.S. Congress, Senator Lamar Alexander, who also had served as the Secretary of Education prior to his election to the Senate. She referred to the charter schools as chartered-public schools; she stated that she believes that the current state of our public education system is a “national security issue.” Senator Landrieu summed up her points and turned over the conversation to the moderator.

Up next, Jim Shelton gave an overview of the i3 grant and talked about the role of New Schools New Orleans as an i3 grantee. His discourse was followed by a presentation by Kingsland of NSNO, which focused on the Guide, highlighting the five principles of the reform model (The Role of Government, The Expansion of Great Schools, The Transformation of Failing Schools, Family Choice and Educator Choice). He told the story of New Orleans public schools and then went a little deeper into the five reform principles. Disregarding the numerous false statements made during his presentation, I would like to focus on the principle of Family Choice. Kingsland and Senator Landrieu spoke about “choice” stating that in New Orleans, parents can send their children to any school they desire. Each time such a statement was made, I said to myself, “this is not true, if that were the case my son would actually be in the school of my choice.”

At the conclusion of the panel, Ms. Bigard raised her hand to get the attention of the moderator; though called upon by Senator Landrieu, she began to tell her story of her unfortunate experience with the school system in New Orleans which contradicted much of what the panelists had previously stated. This opened up the space to discuss our concerns related to Family Choice, NSNO’s forth principle. It was made very clear that parents had more options before Katrina without this reformed system. For example, parents with more than one child in the same age range are not choosing to wake up at the crack of dawn and get each of their children to multiple bus stops when they could all be attending the same school. Currently in New Orleans, a class of us have the choice between sending our children to a school that has been graded D or F by the state and others have the choice of sending their children to A and B schools; these are the same options parents had before Katrina.

After Ashana and I expressed our concerns openly, during the briefing, Senator Landrieu asked to meet with us after privately following the briefing to discuss how she might further address our concerns. By the conclusion of our meeting, Senator Landrieu agreed to help both Ashana and I navigate the school system in New Orleans by getting our children, and any other children we knew, into the school of their choice. She also agreed to come to New Orleans and tour several schools with us to look at reform from our point of view.

Never underestimate the power of parent organizing and speaking truth to power. It is now time to bring balance to a debate that has been unbalanced for the past 6 years in New Orleans.

Our Community, Our Schools, Our Children

“Power concedes nothing without a demand. It never did and it never will. Find out just what any people will quietly submit to and you have found out the exact measure of injustice and wrong which will be imposed upon them, and these will continue till they are resisted with either words or blows, or both. The limits of tyrants are prescribed by the endurance of those whom they oppress.” Frederick Douglass