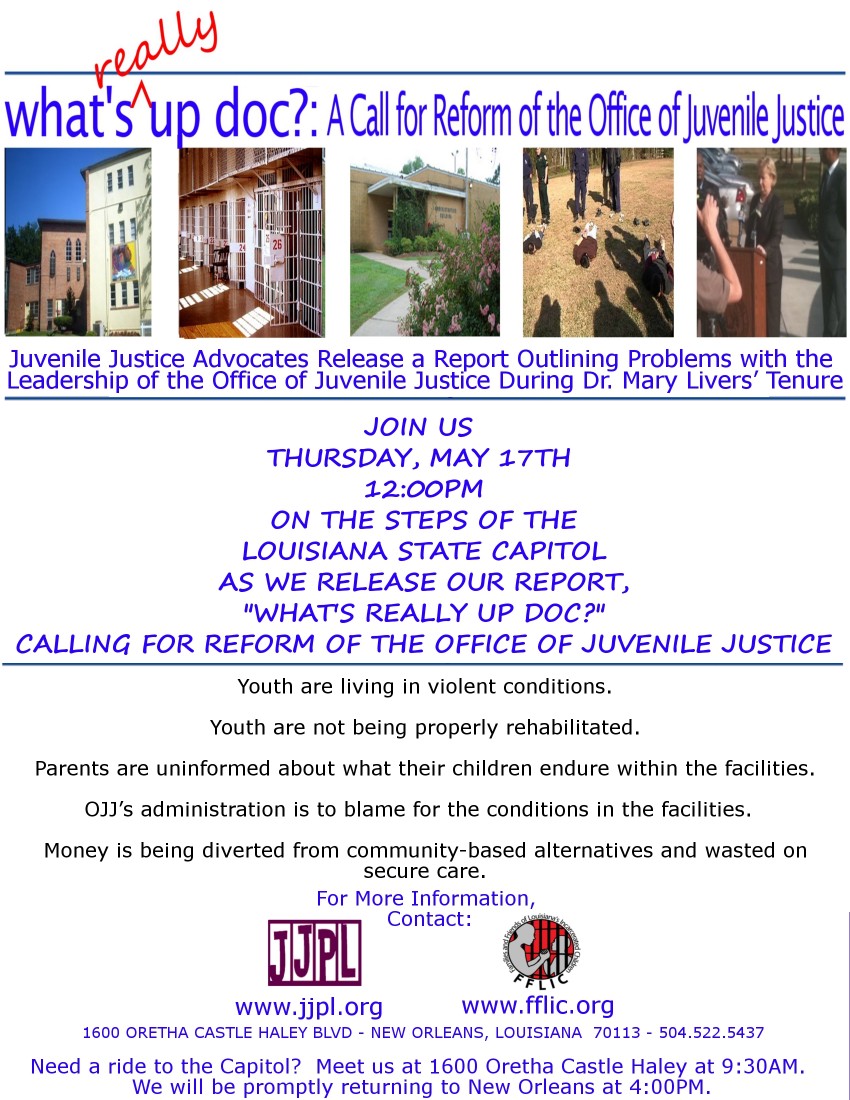 FFLIC and JJPL Set to Release Joint Report on OJJ

BATON ROUGE, LA — On Thursday, May 17th at 12 pm, Families and Friends of Louisiana’s Incarcerated Children (FFLIC) and Juvenile Justice Project of Louisiana (JJPL) will hold a press conference on the front steps of the Louisiana State Capitol. The press conference will highlight a recently released report entitled What’s Really Up Doc? which details serious problems within the Office of Juvenile Justice (OJJ), from the top administration to the operation of secure care facilities. The report highlights poor leadership, lack of reform, and inadequate rehabilitation for youth and was produced as a joint effort of both FFLIC and JJPL. These problems have been compounded by recent proposed budget cuts by Governor Jindal, which threaten both community based contracts and secure care.

In 2008, Governor Bobby Jindal appointed Dr. Mary Livers as Deputy Secretary of OJJ. Governor Jindal charged Dr. Livers with reforming the OJJ upon her appointment. Since then, OJJ has been plagued by problems and Governor Jindal has decimated funding for the agency.  This week, the Administration announced even further anticipated cuts to the Office of Juvenile Justice, despite the fact OJJ has already cut funding for alternatives to secure care detention.  This is despite the fact that The LaMOD (Louisiana Model) Rehabilitative Model, which is based on the Missouri Model, a national “best-practices” model of juvenile justice reform, mandates smaller, regional based facilities with more alternatives to incarceration.

“FFLIC’s major concerns includes the fact that youth are living in violent conditions, OJJ’s administration is to blame for the conditions in the facilities, youth are not being rehabilitated, money is being diverted from community-based alternatives and a continuum of services for youth across the state, and parents are uninformed about what their children endure within the facilities” says Gina Womack, FFLIC Director.

The report concludes with the recommendation that there needs to be change at the top levels in a demonstrated commitment to juvenile justice reform, from the Governor’s office to the leadership of the Office of Juvenile Justice. The report states that true reform cannot be implemented unless the leadership is willing to take the necessary steps towards such reform.

Families and Friends of Louisiana’s Incarcerated Children (FFLIC) is a statewide membership-based organization that fights for a better life for all of Louisiana’s youth, especially those involved in or targeted by the juvenile justice system or the “school to prison pipeline.”

The Juvenile Justice Project of Louisiana (JJPL) is a statewide advocacy organization dedicated to transforming the juvenile justice system into one that builds on the strengths of young people, families, and communities to ensure children are given the greatest opportunities to grow and thrive.