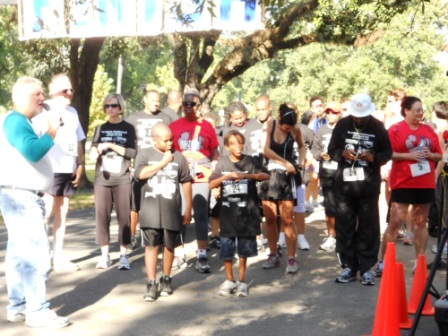 FFLIC joined with non-profit organizations throughout the country in an effort to raise awareness about juvenile justice. Our first National Campaign for Youth Justice 5K Walk/Run was on Sunday, Oct. 17, at Audubon Park Shelter No. 10.

Ernest Johnson, committee chairman for the 5K Race of FFLIC partnered with The Campaign for Youth Justice and races that were organized and scheduled in California, Illinois, Missouri, North Carolina, Oregon, Virginia and Wisconsin.

“The struggles of being a disadvantaged child and family in our state [Louisiana] is a problem that the Friends and Family of Louisiana’s Incarcerated Children see at the heart of our struggle. We are working to empower our families and communities to make our neighborhoods places of opportunity and pride, while working with families involved with the juvenile justice system,” Johnson said.

According to a recent report by the Annie E. Casey Foundation, Louisiana was ranked 49 out of 50 states in a quality of life for children- which Johnson believes may lead to higher incarceration rates among Louisiana youth.

Tracy McClard, a Missouri mother, says she agrees with mission of FFLIC.

McClard is also the founder of Families and Friends Organizing for Reform of Juvenile Justice. She came up with the idea of a 5K Walk/Run three years ago as a memorial to her son Jonathan, who committed suicide while in custody at an adult facility. McClard wants to bring attention to what she considers the plight of juveniles charged, tried, sentenced as adults while being serving their sentences in adult facilities.

“Incarcerated youth and their families are our society’s most forgotten groups. If you do not have a child involved in the juvenile or criminal justice system you really have no idea what families endure.  The isolation, pain, worry, agony, depression and the lack of resources and support are daily companions for these families and youth. Every time I share the story of what happened to my son, people are astonished and outraged that children – in the United States of America – are treated this way. We have this horrible state of affairs not because the general public doesn’t care, but because they don’t know,” McClard said.