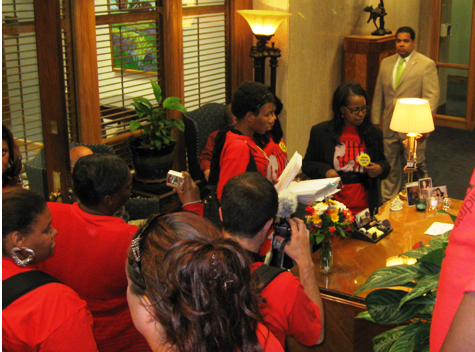 Over the past few years, FFLIC members and staff have been engaged in a cam-paign to end school push outs by dismantling the School to Prison Pipeline. Since the inception of our campaign, our journey has been filled with many victories. This year alone we have released a report in partnership with the National Economic and Social Rights Initiative (NESRI), pushed for legislation to rewrite the state statue as it relates to discipline suspensions and expulsions (Senate Bill 628) as well as require certain class-room management trainings for teacher and school personnel (Senate Bill 527).

On afternoon of April 20th FFLIC held a press conference, where members and staff, along with ally organizations joined together on the steps of the Louisiana state capitol to say ―NO MORE SCHOOL PUSH OUTS‖ as we urged state Legislators, the Board of Elementary and Secondary Education (BESE) and the Department of Education to choose positive behavior methods and approaches when addressing student behavior, and to released some of the findings from Pushed Out: Harsh Discipline in Louisiana Schools Denies the Right to Education (a report written by NESRI and FFLIC).

Pushed Out examines current policies and practices in New Orleans and Louisiana public schools that impact school climate, discipline and educational outcomes for student. The report analyzes suspensions and expulsion data, documents the perspectives of students and parents and reveals the human rights crisis in Louisiana schools; as well as highlight some of the harsh discipline practices and disproportionate punishment of students of color that are used in Louisiana schools for minor infractions.

In the Louisiana State Constitution, the Preamble to Article 8 states that:

The goal of the public education system is to provide learning environments and experiences, at all stages of human development, that are humane, just, and designed to promote excellence in order that every individual may be afforded an equal opportunity to develop to his full potential.

We have found in our research that Louisiana is not living up to the state constitution as it relates to the human development of all students, and to creating just and humane environments that are designed to promote excellence.

Two of the recommendations in the Pushed Out report encourage state legislators to support and pass two bills during the 2010 legislative session; two bills that FFLIC organized to have filed and moved through the legislative process:

On the afternoon of April 22, 2010 at about 1:30 in the afternoon SB628 was heard before the senate education committee. FFLIC members, staff, community members and statewide advocates testified and put in cards in support of the bill. While there was plenty opposition against the bill, the department of education was in full support only adding a few technical amendments. It is because of FFLIC’s effective organizing that SB628 did not just go away; instead of being deferred and halted SB628 was deferred and turned into a study resolution that will create a task force to study and ultimately redraft R.S. 17:416 to ensure that school discipline practices in the state of Louisiana help to increase graduation rates, improve school safety, and provide for fair and adequate due process.

On the morning of April 29, 2010 SB527 was heard before the senate education committee. FFLIC members and staff testified while community members and statewide advocates put in cards in support of the bill. There was no opposition to the bill and only one technical amendment offered by the Louisiana Federation of Teachers. The bill passed unanimously out of the senate education committee. Shortly following, the bill was heard on the senate floor May 5th passed by 31yeas and 0 nays.

On the morning of May 18, 2010, SB527 was heard before the House Education Committee passed favorably without no opposition or amendments. On this day the bill was also reported favorably (15yeas-0nays) to have the bill moved to Local and Consent (special thanks to Rep. Patricia Smith). When a bill is sent to Local and Consent that means it is a non-controversial bill, passed out of committee without opposition with a high probability of not being debated on the floor (in this case the House floor). SB527 is sched-uled for floor debate on May 27, 2010. (Perhaps after Thursday the bill has successfully completed the legislative process and shall be enacted into law)

As we continue to move forward with our fight to dismantle the School to Prison pipeline we move forward with the hopes that next year during the legislative session we will have rewritten the state discipline statue so that it creates polices that will reduce the number of children being pushed out of school through unjustly suspensions, expulsion and school arrest; while at the same time increase the states graduation rate and improve the achievement gap. We know all too well at FFLIC that one of the keys to self-determination and self-actualization is education. Therefore in addition to fighting for juvenile justice reform it is imperative that we fight to keep ALL children in school receiving an education. Make every child’s mistake a teachable moment!