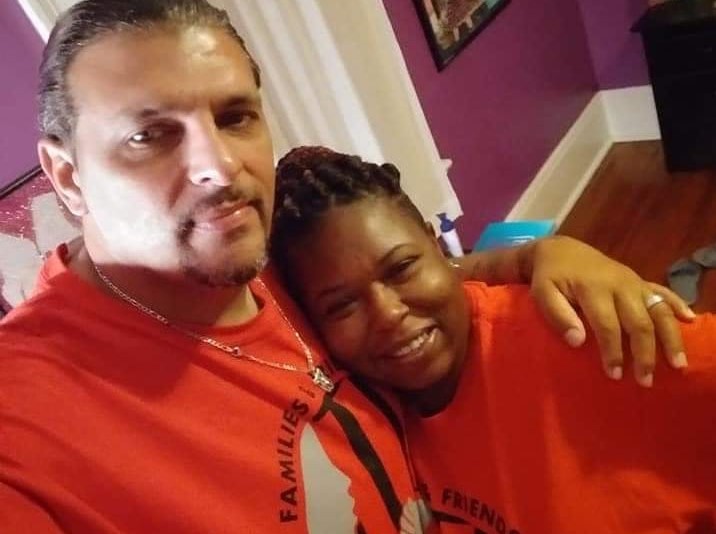 The past year’s hurricanes and flooding, combined with a pandemic and an already tight housing market, have created a lot of challenges for Lake Charles residents, including FFLIC leaders. But the crisis in Lake Charles isn’t receiving much attention outside the region. That’s one reason FFLIC decided to interview Chad Landry and Jennifer Davis, a married couple involved with FFLIC who recently relocated to Lafayette after Hurricane Laura. But talking to Chad and Jennifer revealed much more than the challenges they are facing in this particular moment. The conversation also touched upon the values and commitment of FFLIC and its members to support youth and allow them to learn and grow.

For Chad, his involvement with FFLIC stems from a deep desire to try to make a difference  in the lives of incarcerated youth because he has firsthand knowledge of being locked up as a kid.

“I’ve been through a lot of things they’ve been through. I’ve been incarcerated, and for a long time I was making a lot of bad choices. But I want to help them know there is a way out, even though it’s not easy.”

Chad was able to turn his life around after years of using alcohol and drugs and going in and out of prison, a pattern which began as early as twelve years old. He said his troubles began at school when he started breaking things, like the glass on the fire alarm. Looking back he says he can see that he was “acting out” because of the different forms of abuse and neglect he was enduring at home. Now, he says he wants to teach children to be positive despite those challenges.

“If we could teach kids that even if they’ve gone through something, they don’t have to take on a victim mentality. We can help them think of themselves as leaders. We just have to start to build and cultivate the positive attributes in them.”

Chad also realizes that youth need support in making those changes. “What helped me come out on the other side was having some kind of support system when I got out. Some people literally have no support. This is an issue we could look at for youth– what programs can we have in place, set up, so they know ‘we are here for you when you get out and we will give you a hand up.’”

These two factors–positive thinking and support– are what helped Chad when he got out of prison, and it’s also what has helped him through the difficulties of the pandemic and the multiple natural disasters of the last year.

“Jennifer lost her job. Before, she was taking care of a 90-year-old lady, but with the pandemic, her family stepped in. We basically pawned one item at a time.” Chad also said he would go and feed the birds in the Walmart parking lot to get out of the house.

Then, when Hurricane Laura hit, a Category 4 storm with 150-mile-per-hour winds, they evacuated to New Orleans. When they returned to Lake Charles after the storm, they discovered their apartment had been completely destroyed. They stayed for a few months in New Orleans at a hotel shelter, where they were isolated due to the pandemic. Though they wanted to return to Lake Charles, they couldn’t find a place to stay. Landlords were price-gouging on the rent, and it was hard to find work. So, instead they moved to Lafayette, where Chad had grown up and still had family.

Jennifer, who was raised in Lake Charles, was grateful for the FEMA assistance that allowed them to start over in Lafayette. “They helped us out tremendously. We had to start from the bottom up and they helped us do that. But it’s also never enough to compensate everything you had.” The couple had to buy furniture for the new apartment “room by room.”

They will also have to move once again in November because their landlord is selling the apartment.

“As comfortable as we are here, we’ll have to move again,” Jennifer lamented.

She also described the isolation she has been facing in Lafayette.

“I don’t go anywhere, or know anyone. My husband goes out to meetings, and he meets people, but I stay here and work on my crafts.”

Art is how she copes. She began doing all kinds of creative works several years ago, after her seventeen year-old daughter, pregnant at the time, was killed by her eighteen-year-old boyfriend. To handle her grief, Jennifer wrote a children’s book and a play. Since then she has also created different visual craft art, screenprints, accessories, and paintings. She believes art can be a way for young people to express themselves.

“You have little kids that have been through something, and how do you ask them about it? You get them to draw things out. And even for older kids, when you finish what you’ve been working on, and you see you’ve created something positive, you think positive. It makes them feel amazing about themselves.”

Like Chad, Jennifer also wants to share her experiences to support young people, especially girls and young women, and even all women. Not only was her daughter a victim of dating violence, but also, she is a survivor of violence.

“I was sixteen years old and dealing with that. Everyday, lying to me. I was waking up to fists because he was dreaming I was doing something wrong. I had black eyes and busted lips. My mom would come to my aid, and my first excuse was that ‘it was my fault.’ After a while I got tired of it, and I was like, ‘this is not life.’ I walked away. But then I walked right into another situation. And then another situation. I’ve been held hostage. I’ve been beaten. I’ve been kidnapped. And these were relationships. I thought that’s how it was supposed to be. And then I started to realize, ‘This is not love.’

That’s what she wants to share with young women– that “anytime a man puts a hand on you or talks down on you, that’s not love. Walk away.” She doesn’t want any woman, no matter how old, to go through the physical, emotional, and verbal abuse that she experienced. She wishes someone would have talked to her about dating violence when she was young.

“I wish somebody would have told me, ‘You’ve got this. You can be anything. You don’t need a man to be anything or do anything.’” She says her own mother was a wonderful mother and took care of her, but they never had a conversation about healthy or unhealthy relationships. That’s why she believes it’s important for parents and other trusted adults to talk to young women. She knows first hand that it can make a difference. After her daughter was murdered by her boyfriend, she posted a video about dating violence, and the video went viral, with numerous young women reaching out and sending her messages. One young woman contacted her to let her know that her words had probably saved her life.

Jennifer is also grateful to her husband Chad for helping break the pattern of abuse and showing her what love could actually be like. “He was amazing to me. We argued, but never physically. He was cooking me food and doing things for me, and I realized, ‘Okay, Maybe this is what love is.’”

At the same time that she wants to advocate for youth, her views of incarceration can be a bit complicated, given the murder of her daughter. When talking about the young man who committed the crime, she recognizes, “He was a kid…Some crimes are outrageous, and I get angry just like the next person, but they’re kids. Somewhere along the line, something didn’t go right.” Yet, she also dreads the day when her granddaughter, who was one year old at the time of the murder involving her parents, asks to meet her father. “I won’t be able to do it. I can’t shake his hand or hug him.”

Jennifer and Chad have been through a lot in their lives, but their personal trials, including those of the last year, have only fueled their desire to serve youth. And FFLIC is proud to support their leadership. Chad remembers the first FFLIC meeting he attended when he was recorded talking about the impact he wanted to make on youth, including his own son. He recalls, “I saw the video on Facebook– that it said ‘community leader’–and I thought, ‘I’ve got to step up. People are going to see this and I’ve got to represent this.’ It sparked the leader in me and made me want to be better.”

Similarly, Jennifer said that being with FFLIC has helped her feel more purpose-driven.  “I want to be more involved, do what they are doing. I want to step out there and speak, and let my words be heard,” said Jennifer. Though it’s been tough to create programming during the pandemic, when FFLIC is ready, Chad and Jennifer are also ready to help build up the local chapters. Hopefully, these efforts will take off in the fall, in alignment with FFLIC’s 20th year anniversary gala. FFLIC is honoring twenty years of its existence as an organization that challenges youth incarceration.

Reflecting on his vision of change, Chad says we need to work on unfair sentencing. He reflected on his personal experiences of witnessing how personal relationships and racism impacted sentencing. Jennifer agreed that we need to target the judges, the attorneys, and “those who control the prisons and jail.”

“We need to get through to them to help them see what we see. The first thing, what you don’t do, is sentence them to jail. They’re young. Give them an opportunity and take the time to get in their heads, figure out what we can do to change the situation. These are kids.

FFLIC has reached out to over a dozen Lake Charles members and families to provide support for the ongoing hardships caused by the pandemic, Hurricane Laura, and recent flooding events. Our organization strives to walk hand in hand with our members throughout the many crises they endure. We are grateful for those who support our work so that members, such as Chad and Jennifer, have a community of care and opportunities to give back to share their compassion and wisdom with the next generation.